Water softening devices are used to filter the calcium (Ca+) and magnesium (Mg+) ions that cause hardness from water. The water softening process is based on the ion exchange principle, which falls into the chemical treatment part. Ion exchange, in which synthetic resin is used as a filter material, is performed by processing water containing (Ca+) and (Mg+) ions, which cause hardness, through a sodium-based cationic resin. During this process the Ca+ and Mg+ ions replace the Sodium (Na+) ions attached to the resin, completing the water softening procedure. During the water softening procedure, minerals within the hard water pass through the resin bed and gradually cover the resin. The water softening process continues until the surface of resin grains are completely covered with hard water minerals. When the surface of resin grains are completely covered, the grains must be freed of ions causing hardness and charged with sodium ions again to regain hardness. This is called the regeneration procedure. The calcium and magnesium within the water are held on the resin. 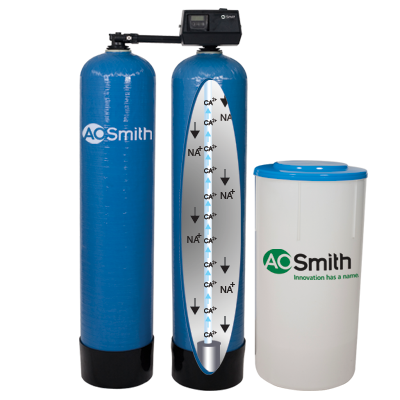 What should you consider when choosing a water softener device?

Deionization treatment systems are designed to meet the needs of industries such as the glass industry, laboratories, the pharmaceutical industry, cosmetics, textile and energy industries with the requirement of high-quality purified water. The unprocessed raw water contains negatively charged anions and positively charged cations. Units performing the deionization procedure are called cationic units in the removal of cationic ions, and anionic units in the removal of anionic ions. The removal of cations and anions is performed within the same unit in some cases; these types of units are called mix-bed ion exchangers. In this type of unit, water is primarily processed through the cationic resin. It is ensured that positively charged ions replace the hydrogen ions and water is processed through the anionic resin. It is then ensured that negatively charged ions replace the hydroxide ions. Thus, a high volume of purified water is obtained. When used, resins become saturated, leading to a reduction in their process efficiency; thus, cationic resin is regenerated with acid, whereas anionic resin is regenerated with caustic. Resins regain their reduced efficiency by being regenerated. The deionization procedure varies based on numerous factors, such as water quality and economy, ion exchange type and regeneration method.

The alkalinity of water is the increasing of the pH value as a result of carbonate and bicarbonates within the water. Due to the white residue that forms as a result of using water with high alkalinity and other similar problems it causes, the production quality of numerous industries that require pure water for their production processes such as the textile, cosmetic, pharmaceutical and energy industries are adversely effected. While the water hardness is eliminated by using sodium based resins, the water’s alkalinity is eliminated by using carbonate and bicarbonate selective anionic resins.
Dealkalization systems are installed before softening systems in order to reduce the workload and salt consumption of your softening systems and they also result in a 6-8% reduction in the amount of chemicals necessary to be used. As a result, the system efficiency and operational life is increased.